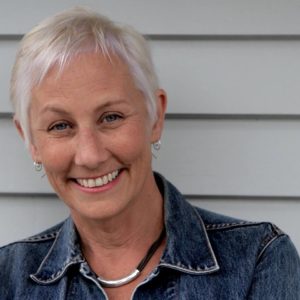 Leanne Pooley has been a documentary filmmaker for over 25 years, has directed  films all over the world and has won numerous awards (including Best Documentary at TIFF).  In 2011 Leanne’s work was recognised by the New Zealand Arts Foundation and she was made a New Zealand Arts Laureate.   Leanne was named an “Officer of the New Zealand Order of Merit”  for Services to Documentary Filmmaking in the 2017 New Year’s Honours List and she is a member of  The Academy of Motion Picture Arts and Sciences (The Oscars).  See Awards and Honours.  Born in Canada, Leanne immigrated to New Zealand in the mid- 1980’s and began working for TVNZ. In 1992 she moved to England where she made documentaries for  Britain’s major broadcasters including the BBC, ITV, Channel 4 as well as PBS and Discovery in America.  Leanne returned to New Zealand in 1999 and established SPACIFIC FILMS.   Her documentaries have screened in more than 100 countries, won dozens of awards and  include topics ranging from rugby to the Pope.  See Filmography .

Leanne’s most recent documentary (made during lockdown) is FIGHTBACK – JOSEPH PARKER.  An intimate, often funny, look at the life of a heavyweight boxer fighting his way back to the top.  The documentary was commissioned by the international sports streaming platform DAZN.   Leanne released two feature films in 2020.  THE GIRL ON THE BRIDGE  for Augusto Entertainment and WE NEED TO TALK ABOUT A.I. for Universal Pictures and GFC Films.  The former follows suicide survivor and activist Jazz Thornton as she confronts teenage suicide head on.  The later explores the existential risk and exponential benefits of Artificial General Intelligence.

In 2015 Leanne co-wrote and directed the animated feature 25 APRIL. This innovative documentary uses animation to tell the story of the ill fated WWI Gallipoli campaign. 25 APRIL premiered at the 2015 Toronto International Film Festival (TIFF) and was one of just nine films in competition at the Annecy International Animation Film Festival (the world’s premiere animation festival). 25 April is the first New Zealand animated feature to qualify for Academy Award consideration and was on the 2016 Oscar’s long-list.

In 2013 Pooley directed the 3D feature film BEYOND THE EDGE  for the General Film Corporation.  This film tells the story of Edmund Hillary’s conquest of Everest. It premiered at the Toronto International Film Festival (TIFF) and was a runner-up for the People’s Choice Award for Documentary. Leanne received the “Best Director-Documentary” award at the New Zealand Film Awards for her work on BEYOND THE EDGE.

Previous documentaries include  SHACKLETON’S CAPTAIN  a feature length dramatised documentary about Frank Worsley.  Captain of Sir Ernest Shackleton’s Endurance which was crushed by pack-ice off the coast of Antarctica in 1915.  The documentary feature  THE PROMISE, about euthanasia campaigner Lesley Martin which won the 2006 New Zealand Screen Award for “Best Documentary” and  HAUNTING DOUGLAS about choreographer Douglas Wright. HAUNTING DOUGLAS was Leanne’s first feature length documentary.  Haunting Douglas earned her the award for “Best Director” at the 2005 New Zealand Screen Awards. The film also won “Best Documentary” at the International Reel Dance Awards.  For a full list of Leanne’s Directing/Producing Credits go to Filmography .

Leanne has served as a judge for the International Emmy Awards,  is a voting member of the Documentary Branch of the Academy of Motion Picture Arts and Sciences (The Oscars),  has extensive teaching experience and has published several articles on documentary filmmaking.

More information about Leanne on Wikipedia.