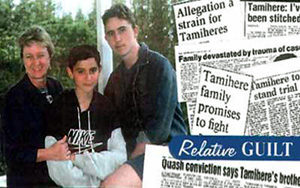 When David Wayne Tamihere was arrested for the murder of two Swedish tourists in 1989, his family was cast into a nightmare.

For ten years they’ve served their own sentence.

Relative Guilt tells their story – a story of scorn, ridicule, and abuse meted out by an outraged nation.

Watch a video excerpt from Relative Guilt Television, 1999 NZ Onscreen if the video embedded below isn’t viewable on your browser or device. (3 more clips available at NZOnscreen)