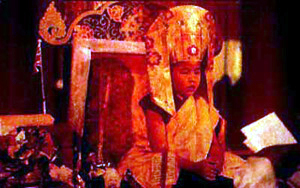 From building sandcastles on a North Shore beach to sitting on a throne at the foothills of the Himalayas, Kiwi Buddha is an incredible story about an amazing Kiwi kid.

Watch a video excerpt from Kiwi Buddha Television, 2000 (Documentary) NZ Onscreen if video embedded below isn’t viewable on your browser or device. (2 clips available from NZOnscreen.)

“Kiwi Buddha follows the journey of seven-year-old Rinpoche as he becomes the first Buddhist High Lama incarnated in the Southern Hemisphere. ‘Venerable Pong Re Sung Rap Tulku Rinpoche’, is a schoolboy from Kaukapakapa, north of Auckland. The film documents Rinpoche’s journey as he leaves small town New Zealand behind (along with McDonalds and Pokemon) to travel to a monastery in the Himalayas where he will spend his next 20 years studying Buddhism. Kiwi Buddha sold to the National Geographic channel and to 60 territories.”