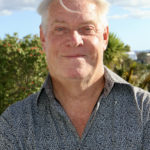 Having begun his TV career at TVNZ in the late 1980s Dean worked at SKY Sport UK (BskyB) from 1992-1997 before returning to New Zealand to take up the role of Producer/Director of Super Rugby at Sky Sport NZ.

For the next 23 years Dean produced and directed a wide variety of sport, from small local competitions through to the largest events on the NZ calendar; including a 5 year stint as Producer of Sky’s ALL BLACK’s coverage.

For the past 15 years Dean has been the lead Producer/Director of the NZ Warriors (NRL). This included directing multi-camera outside broadcasts, co-ordinating pre and post-match coverage, liaising with international partners and negotiating key relationships with the NRL, the NZRL and the Warriors.

As a Producer / Director Dean has covered many International events including; FIFA tournaments – the most recent being the Women’s U17 World Cup; Rugby League Internationals – featuring both the Kiwis and the Kiwi Ferns; Softball World Championships including the Senior Men’s and the World Juniors; International Basketball for the Tall Blacks; as well as rugby internationals with the All Blacks.

Allied to his live OB experience Pooley has produced/directed numerous studio programmes including for the NZ Warriors (Rugby League), the Wellington Phoenix (Football), the NZ Breakers (Basketball) as well as overseeing all domestic football programming.

As a senior producer Pooley has mentored many up and coming broadcast professionals both within Sky and externally. He has nurtured talent – from presenters to experts across multiple sports, creating diverse on air teams that reflected not just the games themselves but the participants, the fans…the audience.

While working as a Supervising Producer at SKY Sports Dean established extremely good relationships with sports broadcasters around the world, executives and representatives from local and international sporting bodies as well as the clubs they represent. He has been at the forefront of bringing new technology and fresh production ideas to the screen, always aiming to improve the audience’s experience of sport.